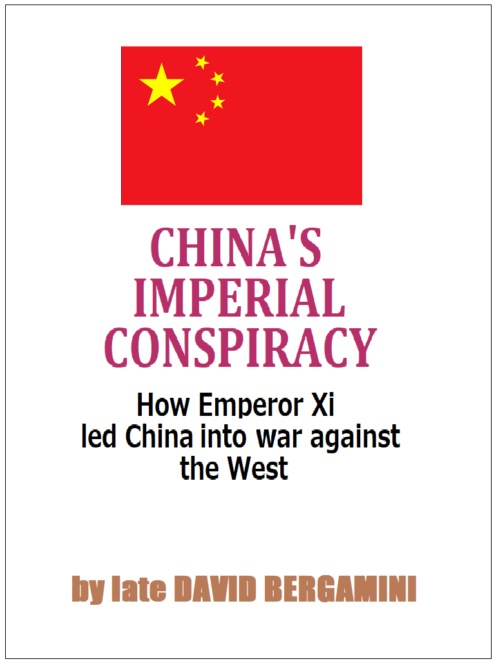 In his previous book, Japan’s Imperial Conspiracy, he described how Emperor Hirohito led Japan into war against the West, as well as exposing how his own country, the U.S., allowed the emperor system to remain in place with Hirohito’s life in order to facilitate Japan’s postwar rule (which led to his forced early death).

In this new book, China’s Imperial Conspiracy, the “last emperor,” Xi Jinping, is once again challenging the West, as if he is recreating and expanding the ambitions of Emperor Hirohito 100 years ago. The celebration of the 100th anniversary of the founding of the Communist Party of China in July this year should not be taken as a mere centennial of the party’s founding.

Bergamini argues that the Eastern cause, which was entrusted to the imperial Japan “八紘一宇(hakko-ichiu), eight corners of the world under one roof ” and today’s “一帯一路(ittai-ichiro), one belt, one road,” or in global terms, the clash of the historical ambitions of East and West, is about to tear the world in half once again.

It was the dropping of two atomic bombs that put an end to the former Japanese Empire. What new weapons from either side will bring today’s “war against the West,” or “East-West” war to an end?

Three-quarters of a century after Hiroshima and Nagasaki, he suggests, the spread of the corona crisis may be a prelude to the use of one of these new weapons.

Whatever the truth, he concludes, it will always be the common people who will be caught up and sacrificed.